The polyester film used by our customers in the process of transferring printed images, once peeled, becomes a waste material. The indirect transfer printing market is constantly growing and therefore from an ecological point of view it is important to use environmentally sustainable materials and processes with the ultimate goal of implementing a circular economic system.

Coveme has studied and developed various sustainable solutions with suppliers and industrial partners:

Coveme's KTR® Green Product and KTR® ECO Product films are an eco-sustainable choice of respect for the environment and at the same time guarantee the same product performance in terms of handling, machinability and quality of the print result compared to traditional products.

A range of products based on polyester film with an innovative coating without formaldehyde, chromium and phthalates. The coating developed by Coveme is based on an innovative solvent-free technology that makes it environmentally friendly both in terms of production process and final product.

Thanks to these coatings free of formaldehyde, chromium and phthalates, Coveme has obtained the Standard 100 certification by OEKO-TEX. This globally recognized label is awarded to materials that have passed the test for harmful substances: it is synonymous with customer confidence and high product safety. Coveme KTR® films have been found to comply with class 1 of the OEKO-TEX standards: this class includes products for babies and has very strict requirements and limit values.

In collaboration with its suppliers Coveme has developed a revolutionary range of products based on polyester film composed of 70% recycled polyester (rPET), with the aim of reaching 100% rPet. This rPET has the same mechanical and chemical, shrinkage and transparency properties of virgin PET, therefore the final product will have the same characteristics and performances guaranteed for by Coveme's standard products. 70% of rPET derives from a recycling process in which post-consumer waste (plastic bottles, food trays, etc.) is recycled for the production of a recycled PET that has mechanical and physical properties comparable to those of virgin PET.

In addition to giving plastic waste a second life, during the rPET production process the greenhouse gas emissions (GHG), measured to assess the impact of the carbon footprint, are lower than the GHG emissions generated by the production of virgin PET.

According to an analysis by DTF (Dupont Teijin Film) based on market data collected on the carbon footprint generated by the production of various films including PET and rPET, it becomes evident that the value of the rPET carbon footprint is the lowest of all.

Coveme, in collaboration with important international partners, has studied the feasibility of a circular process of recovery and recycling of the KTR® film:


Stages of the feasibility study:

As far as we know, this circular economy recycling process for transfer release films used in the indirect transfer printing industry is the first of its kind.


From a sustainable perspective of protecting the environment that surrounds us Coveme believes that it is essential to implement the recycling of these large quantities of PET in the coming years, but this will only be possible with an open collaboration between the various players in the value chain.


Contact us if you would like to be part of our closed loop recycling circular economy project! 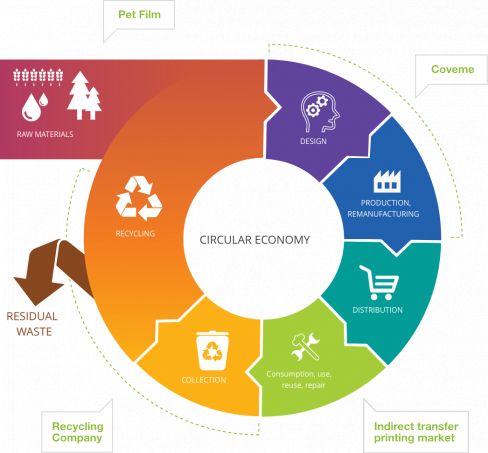